One of our leading syndicator’s, BlueBlood Thoroughbreds goes back to back yesterday winning the LISTED ATA/BOB Hoysted Handicap with She So High as they did last year with Secret Agenda.

The Group One Galaxy in Sydney is in trainer Mick Price’s sights after mare She’S So High return to racing with a convincing win in a Listed race at Flemington.Making her first appearance since claiming Adelaide‘s Group Three Proud Miss Stakes on a soft track last May, She’s So High settled behind the lead in Saturday’s ATA/Bob Hoysted Handicap (1000m) and hit the front at the 200m.

With Damien Oliver aboard, the $2.30 favourite sprinted clear before being eased down late to beat Thermal Current ($15) by a length, with another three-quarters of a length to I Am Someone ($4.20) third.With the track rated a Good (4), Price said She’s So High was able to get sufficient give in the ground to let down strongly.And he’s hoping to strike some soft ground in Sydney during autumn.

“She was never going to be a summer mare and she will be off to Sydney now,” Price said.“She might be a nice horse to run in The Galaxy over 1100 metres if we kept her fresh.“She’s not a Group One mare at the moment, so you are always trying to improve them.“If I can keep her fresh I think it would a beautiful race for her if the track is chopping out a bit for her.”

The Galaxy is at Rosehill in three weeks and Oliver also believes the four-year-old could make her presence felt should she head that way.

“I wouldn’t put that beyond her, for sure,” he said.“It was a comfortable win today. She has come back well and it was a nice race for her.” 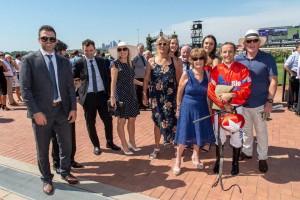