Great start to the 2020 year for team BlueBlood’s with Euro Hustler breaking through to win his first race from his 4th start yesterday.

Euro Hustle has shown good ability from the outset but has had a few set backs early in his training career but his trainer Michael Costa always known that he could produce a run like he did yesterday, and it’s fantastic to finally see it come to pass and him show his ability to his BlueBlood Thoroughbreds connections, a most deserving win for all involved. 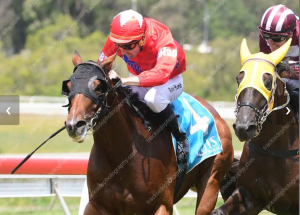 Euro Hustler jumped away brilliantly and showed good pace to press forward and lead the early stages of the race. Ryan Plumb his jockey made a sensible decision to allow the horse on his outside (Sara Man) to press forward and take up the lead as he was racing quite keenly, especially when Madcall zoomed up outside him. Those two leaders then overdid it a bit and Euro Hustler was able to get cover and have the drop on them once straightening.

The tenacity he showed when challenged the whole way down the straight. He really kept digging and found enough to get over the line. This should win will help build the horses confidence and we should see more wins installed.

Congratulations to the winning connections: