It was a run away win for SO UNITED (By So You Think) who was rewarded with a 3.5L romp at Canterbury Park over the 1550m. The half-brother to Blueblood Thoroughbreds standing stallion  UNITE & CONQUER has been given time to find his mark and he looks set to go through the grade in style with a big future ahead.

When the gates opened SO UNITED jumped well from his inside barrier and showed good speed to go forward and lead in the early stages. There was some pressure for the early speed, and he clocked a couple of sub-11 second sectionals as a result, but he was then able to settle into a fluent rhythm throughout the middle stages of the contest. Jockey Brenton Avdulla upped the tempo from the 500 metres, and it was soon clear rounding the final bend that he had the rest of the field in trouble. He gave a good kick on straightening up, and they simply didn’t see which way he went as he shot clear to register a decisive success by 3.5 lengths.

Brenton was over the moon with your gelding, saying how he was able to slow the race down to give him a breather mid-race before then kicking for the win. He was incredibly strong at the finish, and we knew the step up to almost a mile was going to bring about improvement and so it proved. He is now a winner in town in only his second start, and SO UNITED looks to have a bright future. 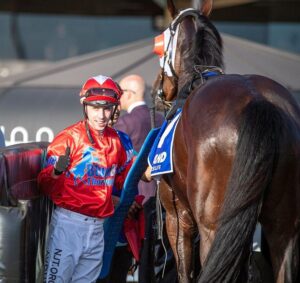